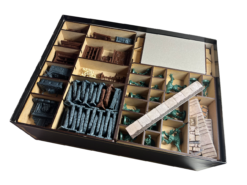 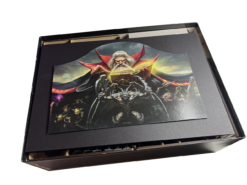 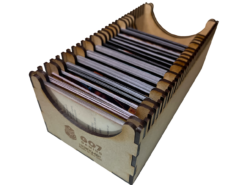 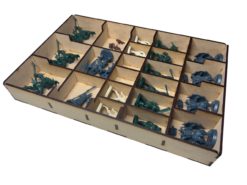 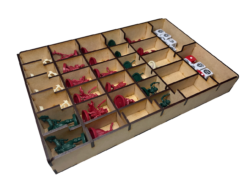 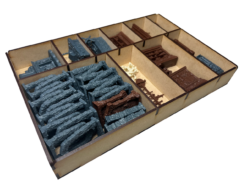 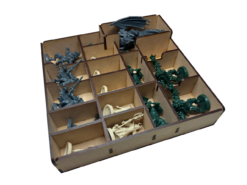 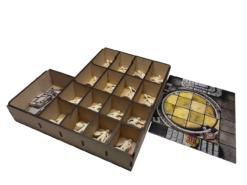 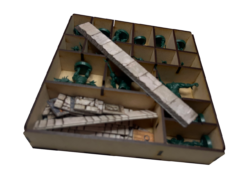 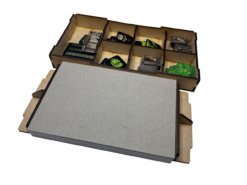 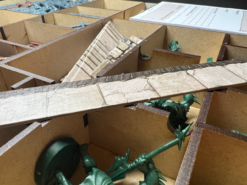 The Go7 Gaming organizer for HeroQuest (2021 edition) provides storage for the base game, Mythic content, and the Keller’s Keep and Return of The Witch Lord expansions.  Our solution uses the base game box to store all components and there are a few open slots to store Commander of the Guardian Knights minis (2) and more!

The Go7 Gaming organizer for HeroQuest (2021 edition) provides eight trays of storage for the base game, the Mythic content, as well as the Keller’s Keep and Return of the Witch Lord expansions.  Our solution uses the base game box to store all components and there are a few open slots to store Commander of the Guardian Knights minis (2) and more!

Our design approach with this game was to provide three large trays for base game minis and three smaller trays to store the tokens and minis for the expansions.  The one exception is we provide hero storage for all heroes using one of the large base game trays.  In this way you can quickly locate the components you need based on whether you are playing a base game quest or an expansion quest.   All cards are stored in a shared card tray with dividers and the base game tokens are stored in a dedicated token tray that also stores the character pad.

There is room on top of the trays for the game board and screen.  Manuals are stored on top of two trays in recessed cutouts.

One review with a 4-star rating

Step Two of the stacking order should list Large Mini Tray #1 (not 2.) Also intestinal enough some of the trays pictures are the reverse of how they actually are!…

Any chance we can get some more pictures that are more top down as well as how everything goes in, seems to be a missing tray

The instructions linked on the left have a how to store everything in the box. The top pic includes all trays. The board uses the rest of the space on top.

Shipping now. The response for this organizer has been high, so we are running a few days behind on shipping as initial stock has been depleted. We are working 16 hours a day to produce and ship the remaining orders. The order to ship time is ~3 days now. Peak order to ship time will probably hit 4 days and then shrink until all orders are filled over the next week.

When will these begin shipping? I’m so excited to ditch the thoughtful, but ultimately annoying and space-consuming, plastic trays!