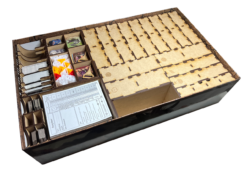 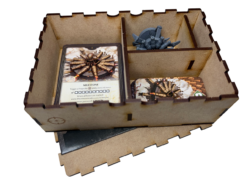 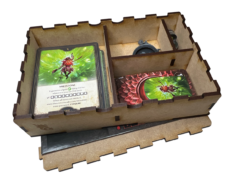 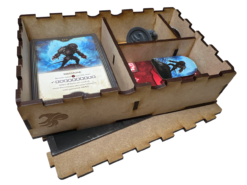 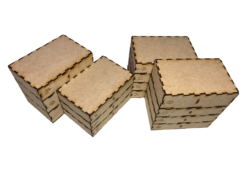 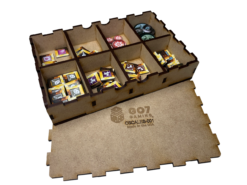 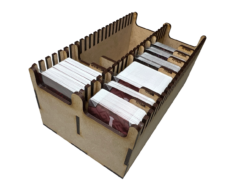 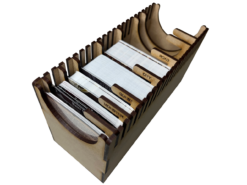 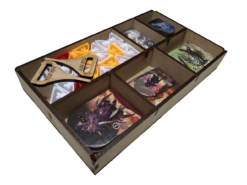 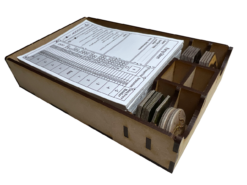 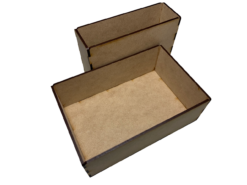 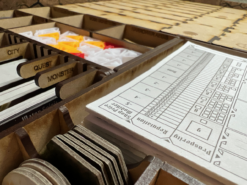 Our design philosophy for this custom storage solution differs from the approach taken by others for Gloomhaven. While it did increase the cost of the solution over competing options, we engineered the storage solution that we felt the game deserved.

Crimson Scales includes many small, thin cardboard boxes.  These are an excellent touch for an amazing game and are required, given how the game exposes more options as you progress; however, if you are willing to spend additional money to buy a storage solution for what is arguably one of the most unique game systems of the decade, why settle for a wood tray that simply holds cardboard boxes that will wear out over time and through continued use?

This kit includes fourteen (14) character storage trays with lids that store each individual character’s cards, tokens, minis, and character boards.  The lid has a small cutout to display the character class symbol.  These trays are designed to allow you to store your active cards sleeved, but unused cards are intended to be stored unsleeved.  With that said, some of the character classes will allow all cards to be sleeved and stored safely in the trays. There is also room to fold your character sheet and place it in the tray as well.

Note: this solution does require that you open each character box and character mini box to load the character trays we provide.  Therefore, you will obviously get a glimpse of each mini (and the weakest willed among us might even peek at the cards).  If this is a problem, you should consider having a non-player/spouse/friend fill the character trays for you.

Also, the character trays are designed to store cards in use sleeved.  Unused cards will generally need to be stored unsleeved.

This solution was designed to store your manuals and stickers on top of the trays stored inside the box, which will fill your box to the top.

This solution features extensive etching across the various trays to speed your setup and play of the game, including character symbol etching on character trays.  Our large and small card trays include etched dividers for each card type and supports sleeved cards.

Finally, while we have provided two empty trays to store Gloomhaven components you will use with this fan expansion, we do assume you have a storage solution for Gloomhaven that provides appropriate structured storage for tokens and such and that you will use those trays while playing Crimson Scales.

One review with a 5-star rating

Just received my Crimson Scales and ToA from the second run. I already have my organizer built, so I will see what fits when I have a chance. I suspect it will probably require its own organizer.

I’m here to learn if/when ToA will get some organizer treatment. Please reach out if so!

How do you think this insert will work with the expansion Trail of Ashes?

Tough to say. We have an early copy coming, so once we receive it, we will know more. Our assumption, as always, is that the expansion will not fit. If it does, that will be a bonus.

I’m also curious about this. Waiting for Crimson Scales + Trail of Ashes to arrive soon! Hoping to see some updates, otherwise this looks like a great insert regardless.

Do you know any more about the expansion and the insert now?

Will this work with sleeved cards?